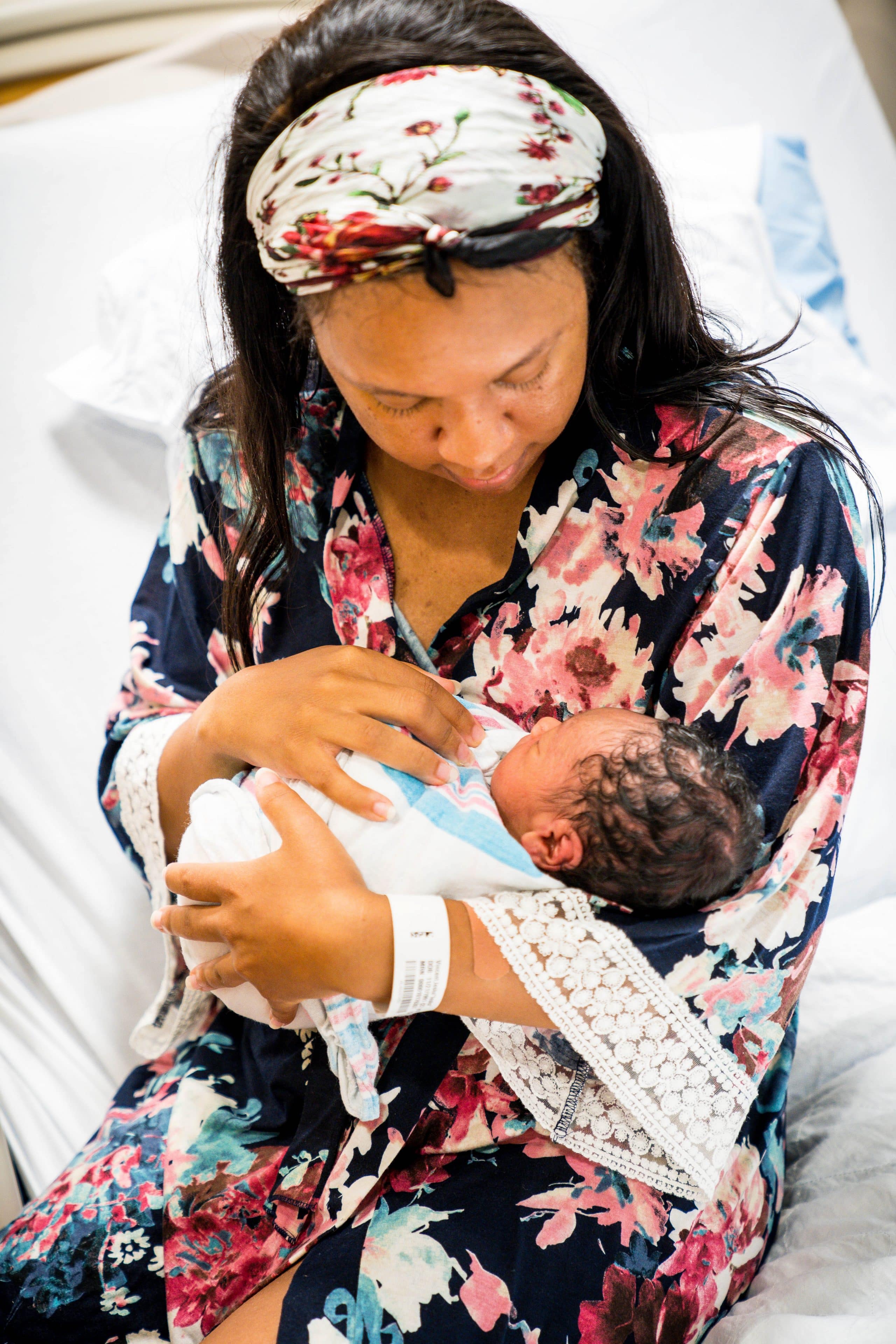 I’m still in disbelief that our son, Carter, is here and that my husband and I are parents. When my husband and I first started thinking about even getting married, we had the discussion of whether we wanted children. He always wanted to have children, but at the time we had the talk, I was 24 and didn’t know whether I was fit enough to be a mom. I remember him telling me that he wasn’t planning on marrying me because of my want to have children or even if I had the ability to have them, which is one of the reasons I married him in the first place. But as we continued our relationship and I grew as a person, I did realize that I wanted to have children with my husband. Now we are here, with our first son, who I can’t get enough of, and I am so excited to now share his birth story as it is a crazy one.

But before we get into this story, make sure to head back to these other posts that talk about my pregnancy journey. 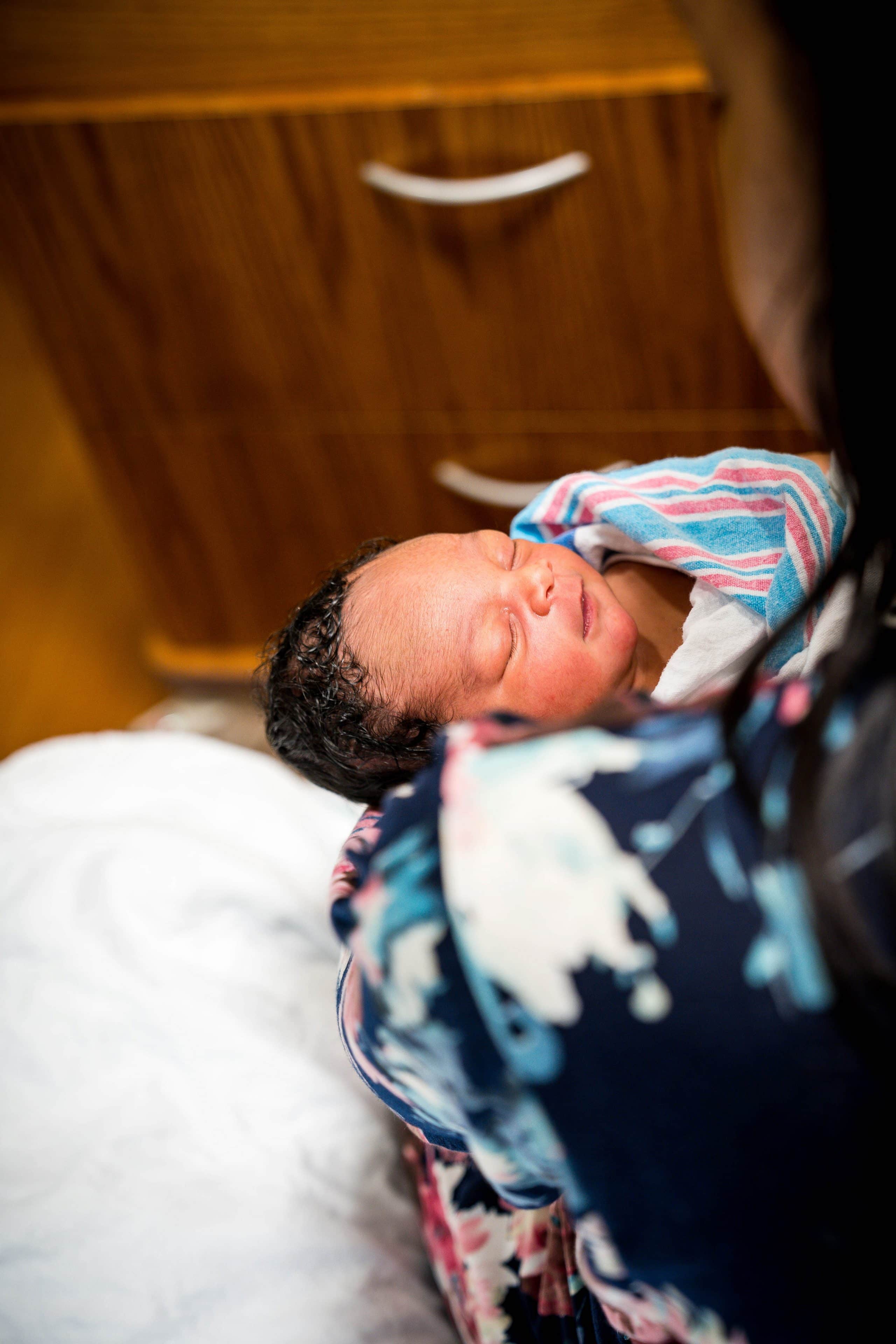 It All Started At A Routine Appointment

The last month of my pregnancy was a struggle. Well, let’s just say my entire pregnancy was a struggle, but starting at 32 weeks, I had been in and out of the hospital due to a preterm labor scare, falling while pregnant, and frequent contractions. Every time that I went to my OB appointments, my family held their breath and waited for another phone call about something else that the OBs wanted to monitor. So when I went in for my weekly appointment at 38 weeks, it was no surprise when they put me on the NST (non-stress test monitor) which then ended up with them sending me over to the hospital for further observation.

The reason why I was put on the NST at this appointment was due to slower fetal movement. Carter was still moving, but he was not as active as he had been before which I had chalked up to him not having much more room. They still wanted to monitor and from that test they told me that his heart rate was becoming irregular, and off to the hospital I went. I called my husband and my parents and told them what was happening, but told them that I probably was going to be released like the previous times.

I told my husband to stay at work (who was over an hour away) and I told my parents, who had just arrived back from the beach with the rest of the family, to stay at home and unwind and that I’ll update them when I get home. 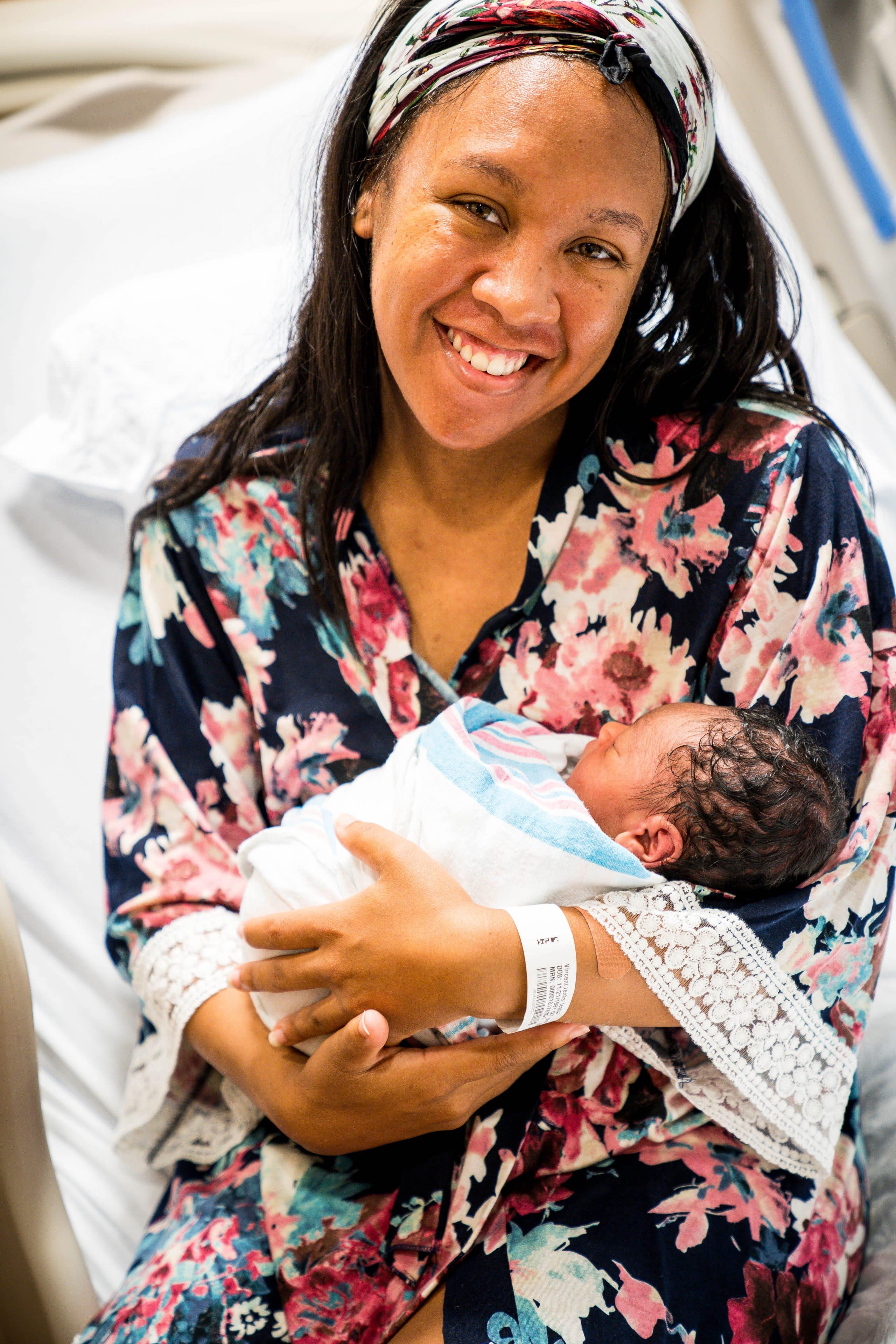 It All Changed Pretty Quickly

When I made it to the hospital, I went to labor & delivery and they checked me in and put me on the NST again. I remember laying there on my phone taking IG stories about how I am back at the hospital again. After about a half hour of the nurse checking me in, the doctor came in and told me about what she is seeing and what is looking for. She then checked my cervix and let me know that I was 3 centimeters dilated. To me, that wasn’t really any news because I had been 2 centimeters for the past couple of weeks. The doctor then went on to inform me that they were going to monitor me for another hour and if things stayed like it was, they would be breaking my water.

At that point, I still wasn’t panicking. That spiel had been given to me before. I called my husband and gave him the update, and continued to tell him that I was still under the impression that I would be heading home in the next hour or so. I told him to stay by his phone just in case. I called my mom right after to update her, and she then said to my dad in the background, “I’m pretty sure she’s having the baby today.” I told her not to jinx me and that he wasn’t going to be coming for the next two weeks.

About 30 minutes went by and the doctor came back, re-checked my cervix and then went on to tell me that things hadn’t improved and to call my husband to have him come because when he arrived, they would be breaking my water. I stared at her in disbelief as she kept repeating to me, “We are having this baby today.”

When she left, the nurses began their process of switching over to the delivery nurses and taking all of the bloodwork that they needed to take. Once they began all of their questions and check-in, I then looked at one of the nurses and went, “What about my hospital bag?” and “I wasn’t supposed to have my car here.”

Within 10 minutes, I called my husband and repeated to him, “We are having a baby today.” He responded with, “So, I guess I should leave work then, right?”. I think we were both in shock.

After all the rest of the calls, my husband was on his way from work, my parents were on their way, and my sister and her kids were coming too. It was about to be a party. 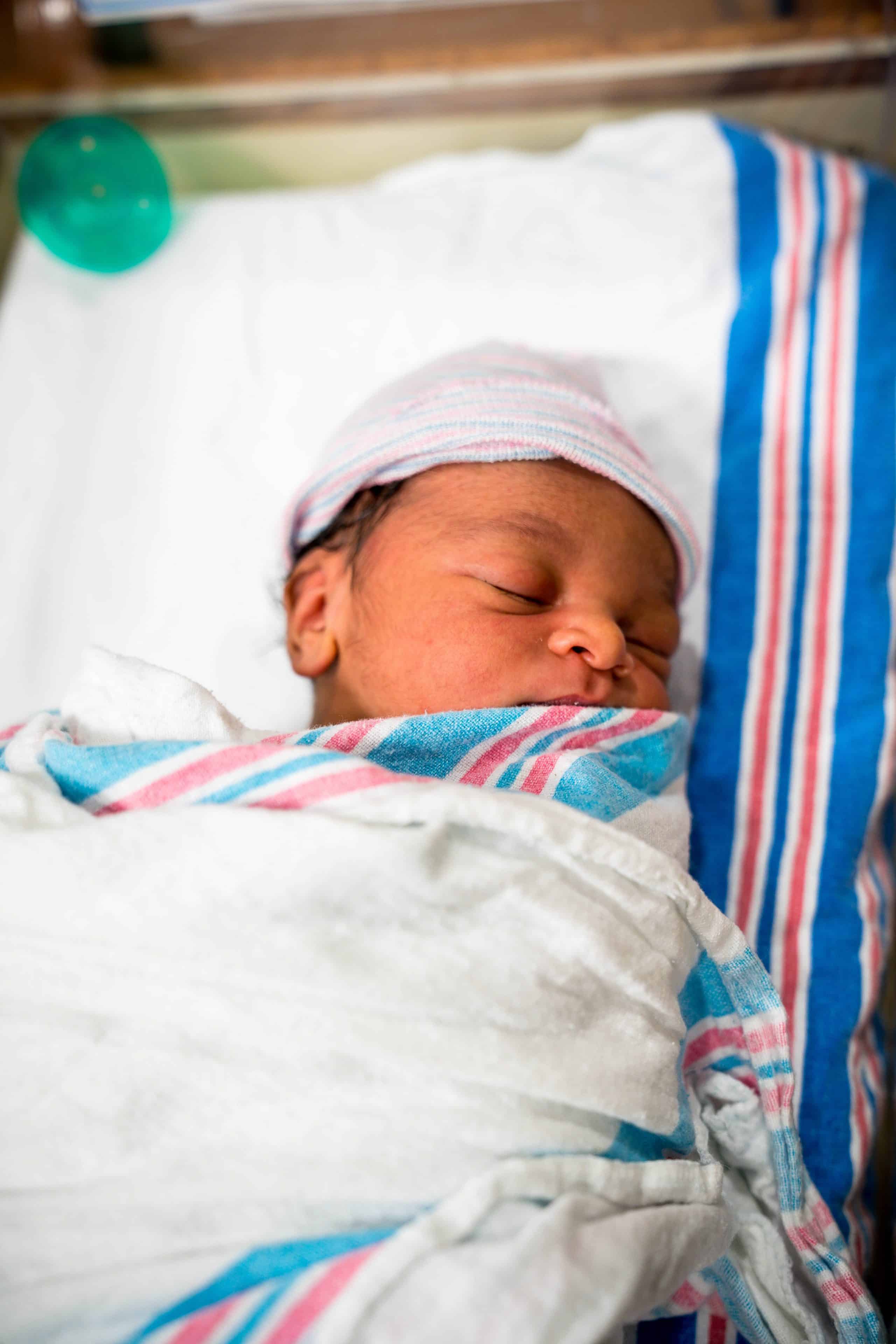 A Quicker Process Than Expected

My husband arrived around 4:30pm. He came in and gave me a hug and a kiss and asked me how I was feeling. I looked at him and told him how I don’t know how the monitor is picking up contractions because I didn’t feel them. Since we had been introduced to the NST readings at my prior hospital visit, he went over and looked at the monitor to see how frequent they were.

In about a half and hour the doctor was in with her tool to break my water. It was an uncomfortable feeling. It was a lot of pressure and then a leaking of water – not the big gush that movies make you think happens every time. Then next came the contractions. I felt first start to radiate in my pelvis but then they moved to my back. It was so painful, and all I could do was keep moving around and have my husband rub my back.

Around 7pm, the doctors changed over and my new doctor (who would end up delivering my baby…also, keep in mind I knew all these doctors prior, they are the group of OBs that I saw over the course of my pregnancy) came in and told me that it would be in my best interest to get some rest for pushing and told me that if at the point I was ready to get an epidural to let them know. She also said that she was going to put me on Pitocin in order to increase the intensity of my contractions to open up my cervix. I was having contractions frequently, but my cervix wasn’t changing. My mind told me that I could be a warrior princess and deal with these contractions. They weren’t so bad that I was in tears and couldn’t process anything, so I thought I could get right through it. Then in the next hour, I realized I couldn’t. And if I were to get any rest, it was time to get that epidural.

They called for the anesthesiologist, and when she arrived, everyone had to leave. They don’t even let your partner stay with you because they have had too many experiences with support people moving or freaking out the mother. The epidural went as expected with me deathly afraid of needles. I cried a little. They kept trying to talk me through it. The first needle I felt with pain and the nurse held me close and steady as I tucked my head down and closed my eyes. The next needle, I didn’t feel the pain, but I felt an extreme amount of uncomfortable pressure. The whole process took less than five minutes, but it was not something that I would look forward to doing again.

The epidural kicked in and then they put me on Pitocin. Around 10pm, I took a little nap as my mom and husband sat and napped in the corner while my sister and her children napped in the waiting room. 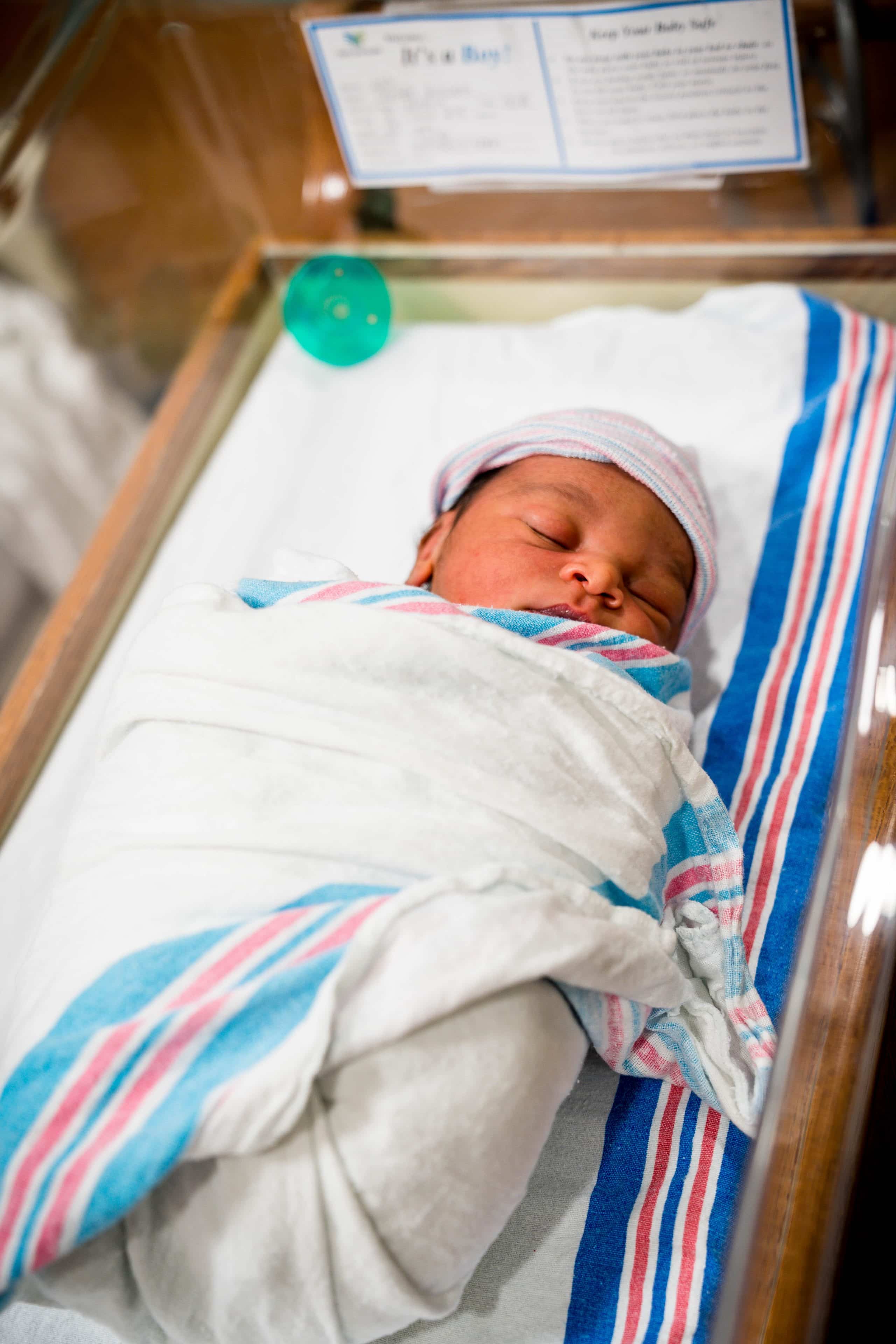 They pulled up the stirrups and began telling me how to push even though I didn’t feel much pressure. Low-and-behold, I actually did. For those who are under the impression that the doctor stays in the room for the entire delivery, you’re wrong. After she told me how to push, she left and my nurse counted me through each contraction to push. She held one leg as my husband held the other, and my mom and sister stayed in the background for support. Through each breath-holding push, I didn’t feel like anything was happening, but my sister kept encouraging me that I was doing what I was supposed to and then he was coming. Typically, they expect first time moms to be in labor for hours. But after about 15 minutes of pushing and feeling the pressure, he started to crown and then it was time to call the doctor back.

At that point, since it was unexpected I would get there so quickly, they told me to stop pushing. Through each contraction, I felt the urge to push and though my body was willing me to do it, I worked so hard to ignore it as my husband stayed by my side.

The doctor came back and after a total of 30 minutes of pushing, Carter Vincent arrived in this world at 12:31 am on August 13th.

When they threw him on my chest, I was so in shock that I couldn’t even believe that he was here, screaming and crying and looking to feed already. With my husband right next to us, we spent our first moments with skin-to-skin and then starting off my first session of breastfeeding with him only being 20 minutes out of the womb.

The moment of his birth gave me a feeling that no language has the words to describe. Each day I look at him and I still can’t believe that he is here and that we made him.