We got our puppy the same month that we got pregnant, but we didn’t know that were were pregnant at the time. My husband had been resistant to us getting a dog for years. It was so bad that we actually took in a dog for about a week, as a trial, when we were back in our apartment, but that didn’t work out. Then after a year of trying to get pregnant, and then finally making the decision to just stop trying to hard, my husband caved and allowed me to get the dog that I had been wanting to get since I got out of college. We got Charlie at the end of November, after my birthday, as a gift to me. We adopted him at 6 months of age and took in our puppy and began training him right away. At that time, Charlie was my main focus. He was the baby of the family. We decided to drop the stress of trying to become pregnant, but unbeknownst to us at the time, we actually were already expecting.

After finding out that we were expecting, I immediately began thinking of how our pup, Charlie, was going to adapt. He was already becoming very dependent on me and his separation anxiety became a problem as he never left my side and cried when I was out of sight. He was also very untrained. He didn’t know any commands. He wasn’t leash trained. He was so skittish. And he wasn’t house broken. But after taking the time to work with him during my pregnancy, we prepared him for the arrival of Carter, and how that he is here, Charlie is doing great with his new brother.

So, in this post, I want to share with you the actions that we took to prepare him for the arrival of our newborn.

The first thing that we wanted to do was to make sure the Charlie was trained in basic commands. When expecting a baby, you don’t need your dog to know how to roll over and play dead. And as much as my husband wanted our dog to learn these over the top tricks, we made sure to focus on the basics so that when baby arrived, we could keep him “contained”.

We started with housebreaking him and training him to give us cues as to when he needed to go outside. At the beginning, any time that Charlie had an accident, we made sure to take him outside immediately to show him that outside where was the bathroom was. And in the cases where we did go to the bathroom outside, we rewarded him with treats. Eventually, he started indicating that he needed to go to the bathroom by going to the door where we would take him out. We rewarded that behavior with treats as well, so that he would keep repeating it.

Charlie continued his training with treat training. We worked on sit, then come, then stay, and then lay down. I will admit that it took us a couple of days, and we used Zak George’s Dog Training as reference to get tips on how to train him. It saved us a lot of time and also made us feel as if we weren’t failing when he didn’t learn the skills immediately.

Charlie, upon his adoption, became very dependent on me. So much that he would follow me around everywhere and when I would leave him some place, even at home with my husband, he would whine and whine until I came back. It was a struggle because when I was home, he would follow me into the kitchen when I cooked, into the bathroom, and would constantly be next to me when I was relaxing in the living room. At first, I loved that he did that, but then I realized how much of a problem it would be when baby would arrive. I couldn’t have him on my heels walking around with our new baby, and I couldn’t have him all over me while I am trying to put baby to sleep or change him.

What we did was to work to focus his attention on other members in our house. We had Charlie focus his attention more on my husband and my brother and become more dependent on them. When he needed to use the bathroom, one of the men would take him out. If he wanted to play, they would play with him. My job around the house was to only show attention to him at certain times in the day and have it be very brief.

We also went back to the treats to reward him when he stayed on his bed or near my husband when I would get up. To show him that it was okay to not follow me around and that there are other people who will take care of him and show him attention.

We made sure to keep rewarding good behaviors, which also included him getting over his fear. We are not sure what Charlie went through prior to him being adopted, but when he came into our home, it became evident that we have a very timid dog. Anytime someone would move, he would immediately flee and run without paying attention to what he was doing. He also would work himself up so much that he would throw up. Again, we realized this would lead to problems when baby arrived. We didn’t want him getting up to run and bump into someone who was carrying the baby, or even more, getting scared and running over the baby is the baby would be on the floor playing.

Early on, we put him into situations that made him a little nervous and put things near him that he would show fear of – such as boxes. When he would flee, we would give him some space and let him settle and try again. When he would stay and sniff around, we would reward him with treats to show him that his courage was something that was a good thing.

We also wanted to Charlie to be able to go outside to go the bathroom, in our yard, without the need for a leash. This would allow me to let Charlie out while still carrying the baby. Or be able to go outside and relax with the baby without having the ned to also be holding onto a leash. By having him trained in the basic commands allowed us to instruct Charlie as to what to do when we went outside. At first, we kept the leash on him and once we got outside, we would let the leash go but still have it dragging behind him in the case that we need to grab it. If he tried to run towards another dog or go to far, we would grab the leash to introduce him to his yard boundaries. Eventually, we weaned him out of the leash by first taking it off of him while we were already outside, then letting him off of it once we got through the door to the outside, then eventually letting him walk out of the house without it on. We still keep his harness on him in the case we need to leash him back up, but he’s been doing great without it.

4. Introduce Him to Baby

The biggest thing to do when getting your dog ready for a new baby is to introduce him to everything baby. While around the house doing regular everyday things, I would play baby sounds – crying, yelling, cooing, etc. – in order to get Charlie used to the sounds. At first, he would show confusing and turn his head side to side, but then eventually, after a few weeks, he became used to it.

We also started setting up the baby’s essentials around the house in the areas that Charlie frequently visits. So in the living room, the pack-and-play, play mat, and baby rocker was put into the room at least one month prior to Carter’s arrival. This let Charlie get used to it being in the area and also allowed him to sniff it and get use to it. He adjusted pretty quickly, though at first, he was a little skeptical about those items being there.

Additionally, I let him smell some of the baby’s newly washed clothes to have him somewhat used to the baby’s smell. Our dog is not allowed upstairs, so we didn’t need to introduce him to the nursery or create that boundary, but if your dog has free roam around the house, I would make sure to introduce your dog to that area or let him know that the room is a boundary.

Lastly, when we were in the hospital, I had my brother take home a hat that Carter has been wearing and let him sniff it everyday until we came home.

All of these things helped us to get our one year old puppy ready for our newborn, and after the initial introduction, Charlie has been very good with giving me space when I am taking care of the baby and also just being aware that he can’t overwhelm the baby with doggy kisses. 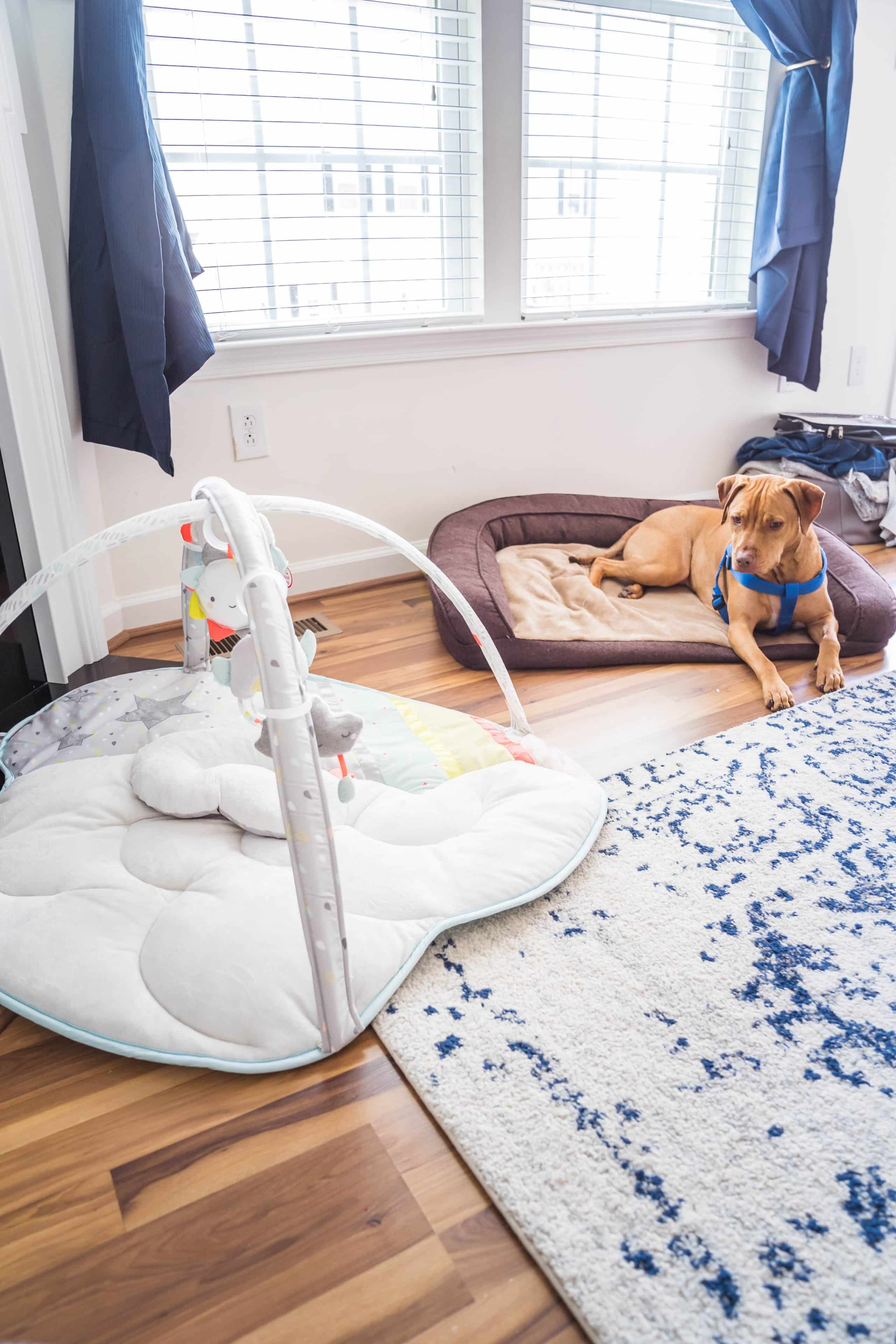 Episode #9 of That Luxe Life Podcast: Luxe Baby Must Haves

3 Ways to Love Yourself This Valentine’s Day

Blogging as a Job: How to Start Your Creator Business

Presenting My Book – “How Do You See Me?”

Diversity in the Influencer Space