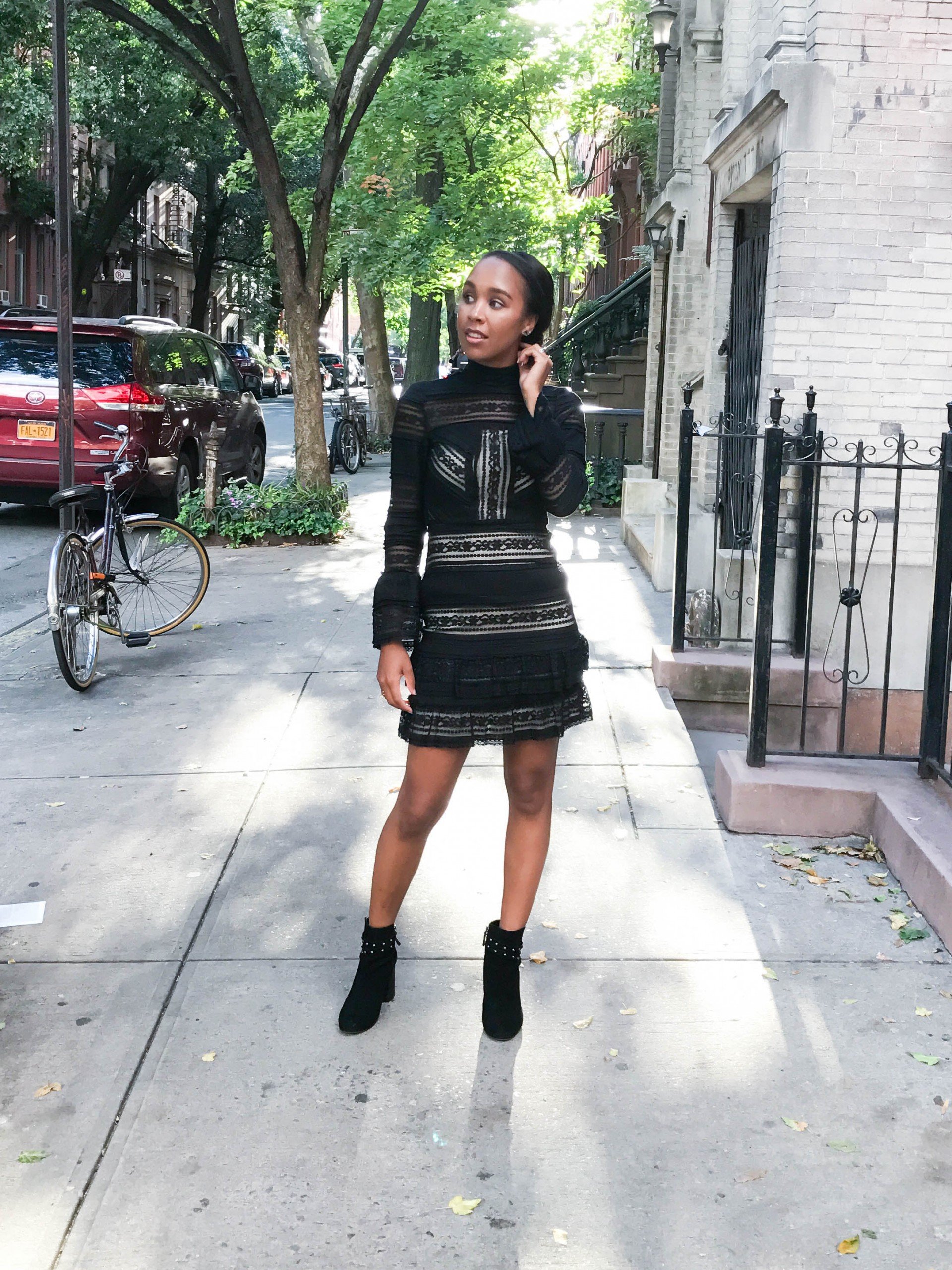 The last time that I went to New York Fashion Week, I was an extra-newbie blogger and I went in February when it was tremendously cold. I had a great time while I was there, but I knew that I wanted to attend more fashion weeks in September where the weather wouldn’t control my outfits. But September kept rolling around and I couldn’t attend. I was graduating, moving, planning a wedding, and everything in between, so I had put NYFW on hold until now.

I probably won’t be heading back for fashion week until next September, but that gives me plenty of time to step my game up and figure out how to make the most of my time at New York Fashion Week. I adore NYFW because I get to network with brands and other bloggers, but I also get to make new friends and meet-up with friends that I have made virtually. It’s amazing to finally see them in person.

This season I was invited to some big shows that I didn’t even think I had the prestige to go, and I got to meet some amazing people. I used the same formula that I used to get invites, which you can find here, and just perfected it some more to not only get invites but meet up with PR companies, attend parties, and gain collaborations while I was there.

I was only able to attend NYFW for two days (well, I was supposed to go for three but I was worn out). Here is my schedule and what outfits I chose to wear for New York Fashion Week:

I didn’t make it to New York until late afternoon because I had work and a doctor’s appointment. But when I arrived in New York, my first stop was over to the 2(X)IST gifting suite where I was able to see the past spring/summer collection and also be introduced to the fall/winter collection. I received some amazing athleisure wear from the new line which I am setting up to show you in an upcoming post re: go-to athleisure wear for the fall/winter, so stay tuned. At the suite, I also received a great massage and was able to hang out for a little while until it was off to my next adventure.

After the gifting suite, I met up with one of my fabulous fellow Philly bloggers and then off we went to the WWD x Samsung party. We had a ton of fun getting to try out all of the technology that Samsung featured. They had this super fun virtual reality slide that I swear was almost like the real thing.

We hung around for a while and got our portraits done and tooled with some other gadgets. Before we knew it, they were turning on the lights and it was time to go. We walked out with some very cool goodies (no, there was not Galaxy S8). And then since I was commuting to and from New York, I jumped back on the highway and took my 1.5 hour trip back home, climbed into bed and planned for my next day. 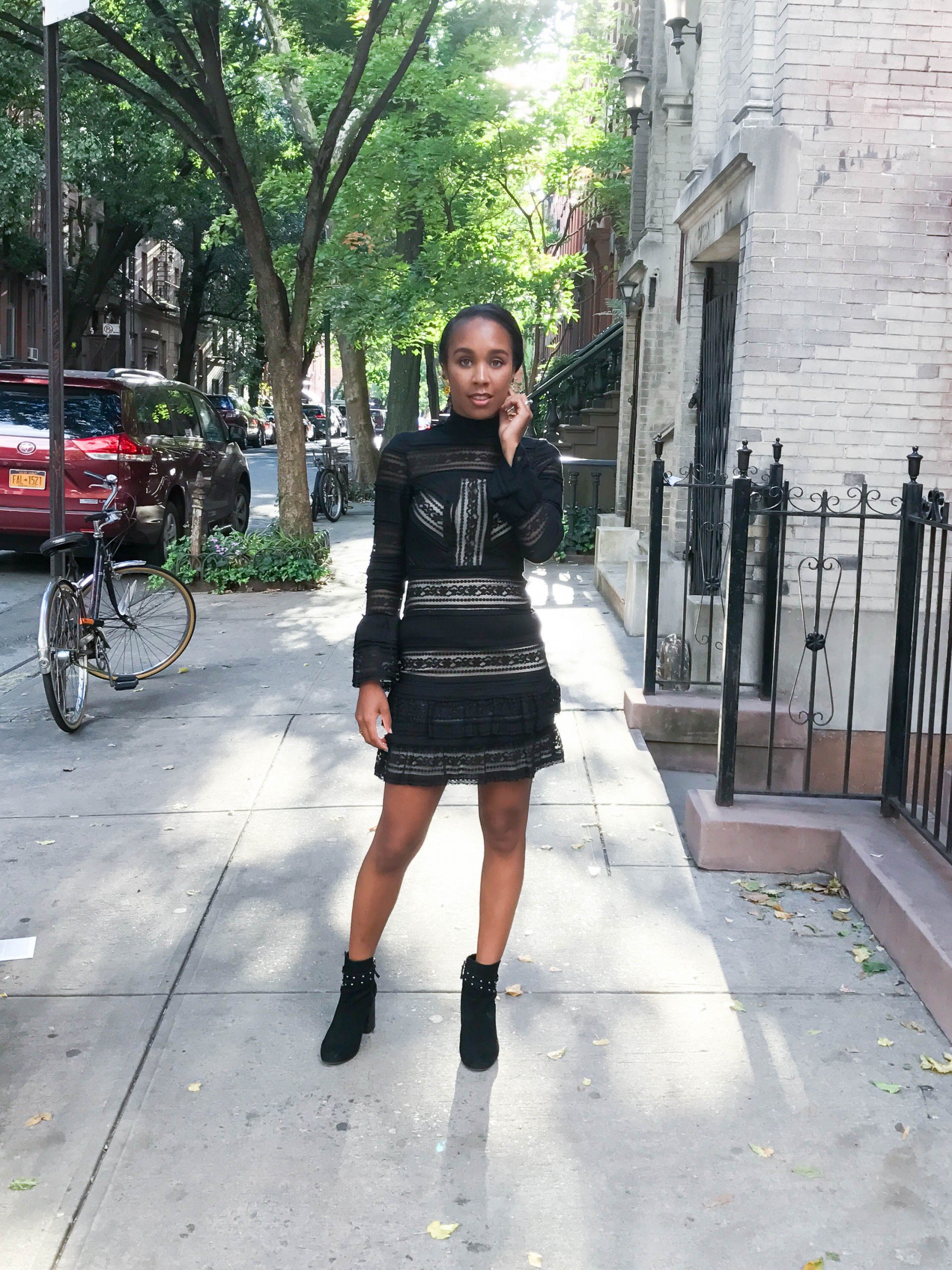 On Saturday, I was up bright and early to take my commute back to New York. When I arrived, my first stop was to Skylight Clarkson Square where I was able to visit the E! Fashion Studio. At the studio, I had amazing pictures taken next to the E! sign. Also, I filmed a short video that showed off me and my runway walk.

Now even though I had only been in New York for about on hour, I felt that it was time to spruce up my look. Next to the fashion studio was the Tresemmé pop-up salon. Now, I am super sensitive when it comes to people styling my hair, especially when I have a weave it, but the stylist refreshed my look and gave me a fabulous pulled back look with the signature braid.

My “hair appointment” didn’t take too long and to take advantage of my down time, I look around at all of the pop-up shops that are in the building. Upstairs there was a Reebok pop-up shop. Papyrus was giving out fashionable postcards for you to send out, and there were a few private lounges there as well. I always recommend taking a look around each of the main NYFW locations. You’ll never know what you’ll find and who you can connect with. 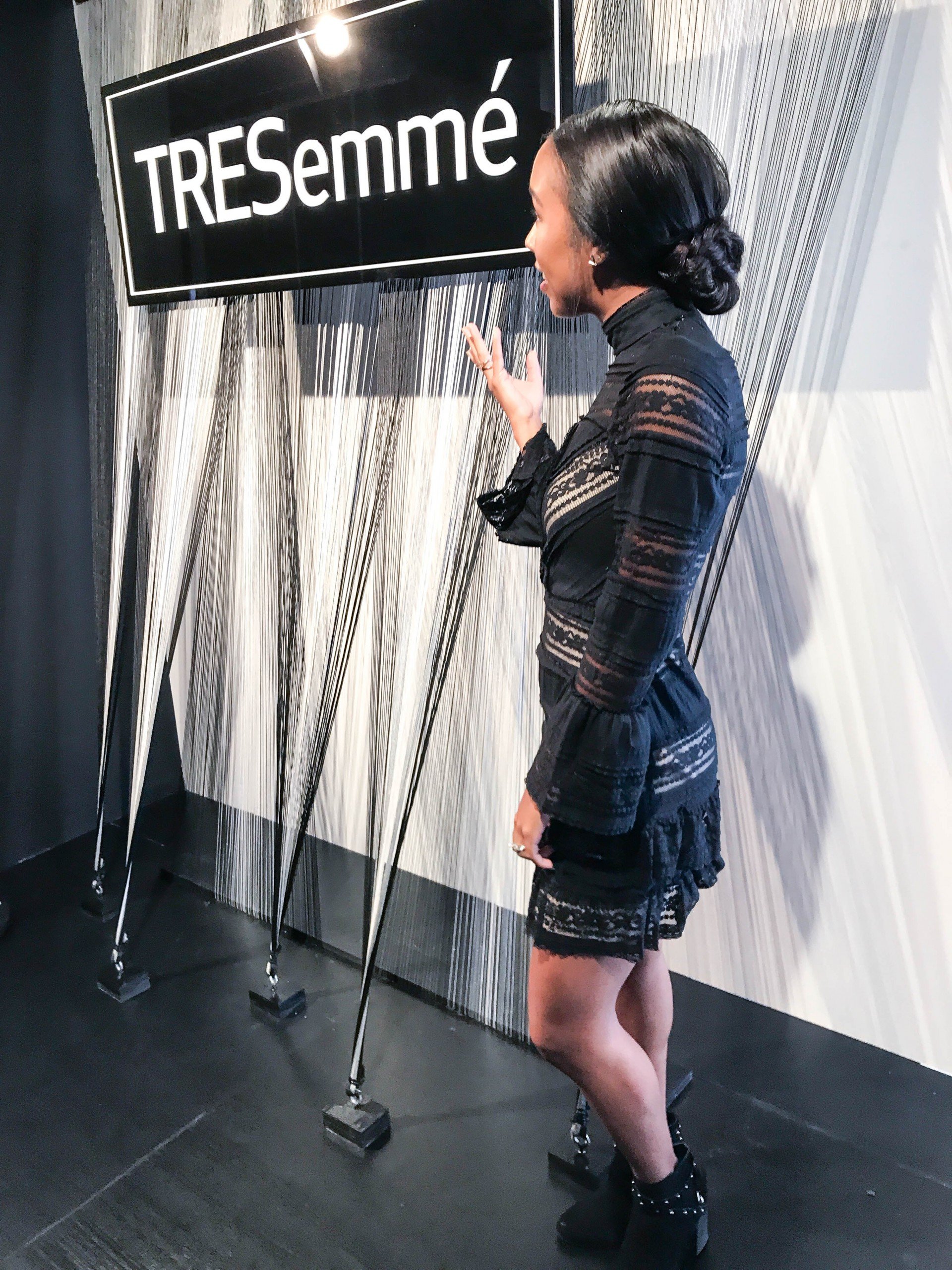 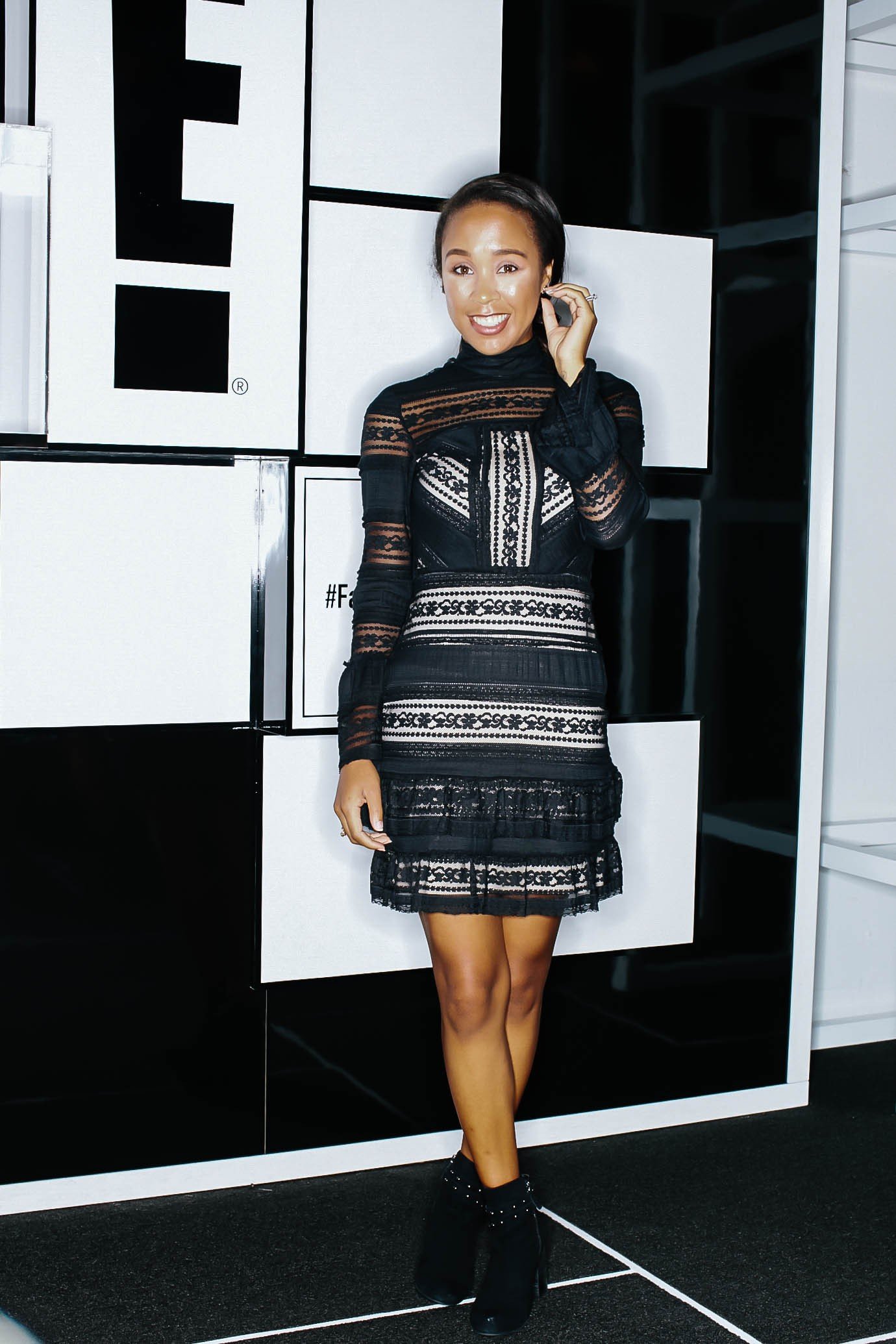 Around the early afternoon, I Uber-ed my way across the city to head over to the Olivia Palermo x Banana Republic meet and greet. The collection of army jackets was super stylish and I wanted to grab some and stash them in my closet. But hubby has me on a budget, so I tucked away my credit card and went on.

At the presentation, I had the privilege of meeting the gorgeous Olivia Palermo herself. Her style is so chic and she is such a beautiful person in and out, and for her to take time to meet us all was something that many designers don’t do. And that says a lot about who she is.

During the presentation, I met a group of wonderful fashion bloggers from Dallas who let me be their buddy for the rest of the day. 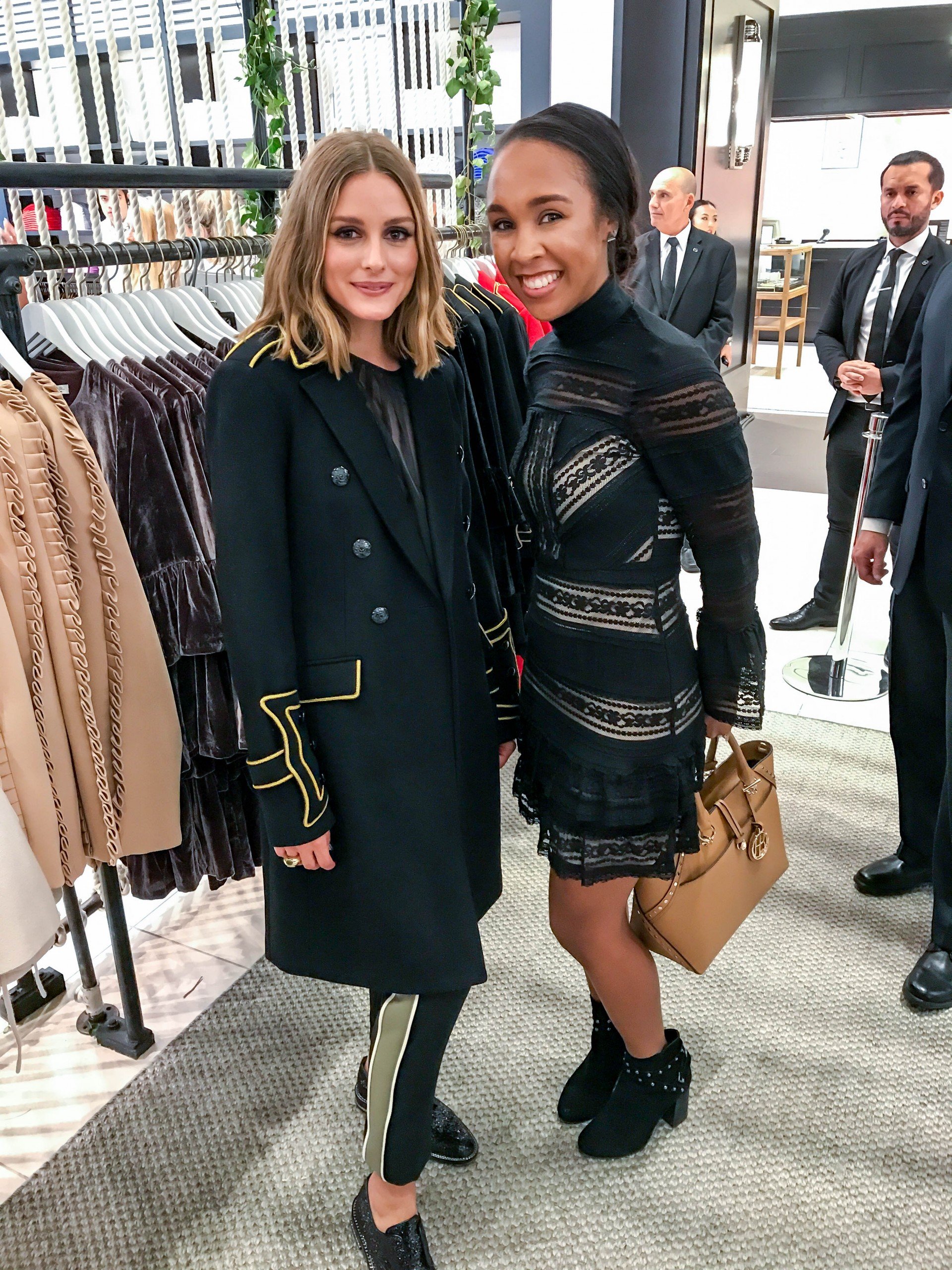 After we left the OP x BR presentation, we headed for lunch then we decided to take a stop and find Carrie Bradshaw’s apartment to take some photos.

Our short photo shoot took place and then I ran into some car trouble – well, parking trouble. I liked the convenience of being able to drive, but I am not sure whether I would do it again. Parking was ridiculously expensive. I had a bad run-in with a parking attendant who lied to me about the price and tried to charge me more than what I was told I would pay. And then, trying to find street parking was like trying to find a diamond in the middle of the desert.

My last event of my 2017 New York Fashion Week experience was a runway show and after party by Philip Plein, and OMG!, it was amazing. You had to catch that on my Instagram stories because Dita Von Teese opened the show, then Future performed during the show, Adriana Lima (one of my favorite models) walked the runway along with Rae Sremmurd, and Teyanna Taylor came out and closed the show dancing during Future’s performance.

And that’s not all, after the show as over, they changed the entire ballroom into a nightclub and then Nicki Minaj came out and graced the stage where she brought out 21 Savage, Yo Gotti, and then Rae Sremmurd again. If you actually go to Nicki Minaj’s Instagram for the show, you can actually see me and my excited self right in the front.

I didn’t end up leaving the city until after 1AM. So the next morning, I couldn’t even move enough to get back into the car for another packed day.

Both of my outfits for NYFW were rented from Rent the Runway.

On Friday, I went a little casual and picked the Free People Another Eternity Top and paired with some hi-rise denim jeans, Sam Edelman brown booties, and gold accessories.

For the second day, I rented a Parker dress that stunned. To not take away from the dress, I work a pair of BP. black studded booties.

My Henri Bendel bag was always with me because it goes with almost everything and it was great for being out in the city for the entire day.

SHOP MY NYFW LOOKS:
(I’ve include links to Rent & to Buy)

The Every Girl Fall Fashion Style